One of the things missing from the budget was a new wood burning stove.

When we first viewed the cottage we had been very pleased to see there was a stove and it looked in reasonably good condition. However after spending a few days there in the cold of October we realised the heat output was not good enough to heat the cottage. 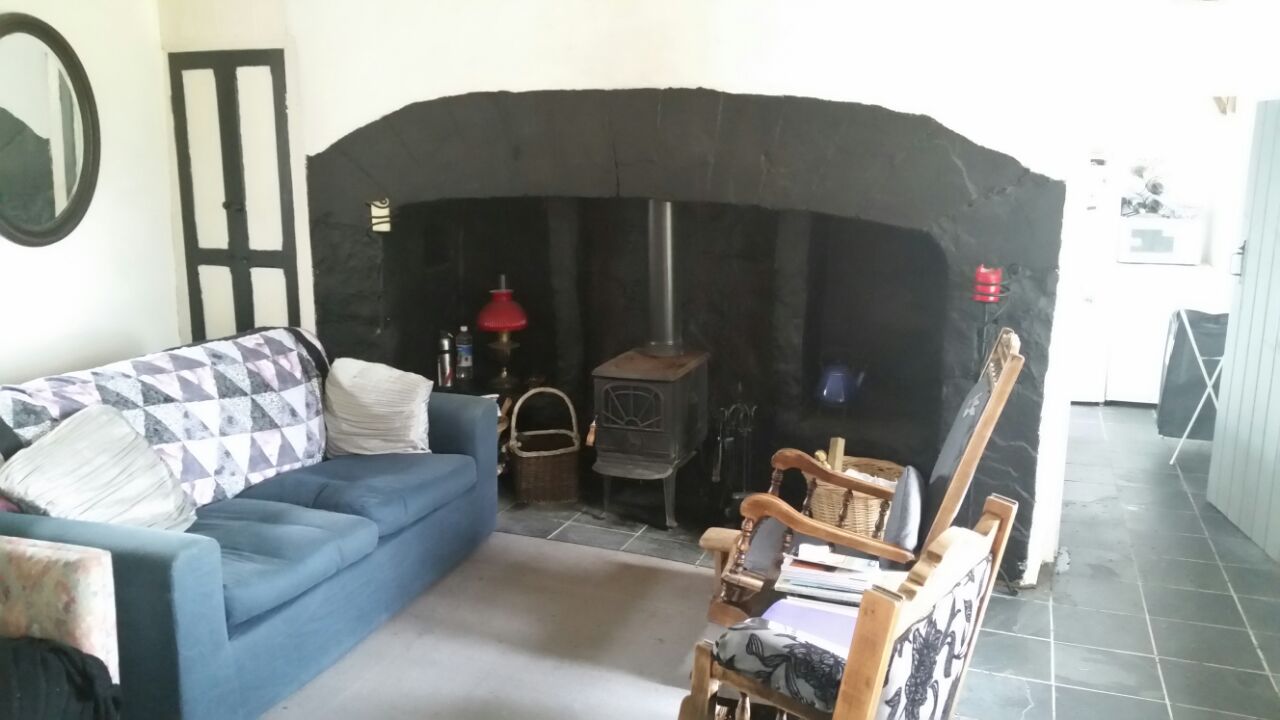 One reason the cottage may have had a smaller stove is that electric underfloor heating had been installed when the floor had been tiled. We had hoped to use it but found during our October trip that despite it being on for most of the stay, it barely made a difference to the room temperature and absolutely guzzled electricity! We needed a bigger stove.

We got in touch with Murphy’s of Kinvara who specialise in stoves and they confirmed based on the dimensions of the living room that we did indeed need a stove with double the current output. We needed to get this installed as soon as possible as we were hoping to spend a few days in the cottage at Christmas when the weather would be at it’s worst.

We soon discovered that there was a secondary reason to get a new stove installed, insurance. To fully insure the cottage against fire we needed to have what is called a ‘double skin stainless steel liner’ in the chimney.

The ‘liner’ part means that the top of the stove must be connected to a steel pipe that goes straight up to the chimney pot. The ‘double skin’ refers to a slightly more expensive version of a standard stainless steel liner, which has a second layer of piping running through it. This double layer reduces the probability of excess heat igniting any exposed thatch and guards against any deterioration/damage to the liner that could then leak sparks or fumes.

The chimney column also needs to be surrounded by a material called vermiculite. This comes in bags of loose fill chips which are poured in around the steel liner to further insulate and protect the flu.

We attempted to find out whether the existing stove had a double liner and had a chimney sweep out to assess. Unfortunately he wasn’t able to get access to the chimney cavity without risking debris from the chimney filling the living room. That process would have also rendered the stove unusable. So we were unable to determine what we had and therefore unable to get insured for fire.

There is no compromising or negotiating on this, in our experience you simply cannot get sufficient insurance for a thatched property unless you can prove you have a double skinned liner. But insurance aside, of course we also wanted peace of mind for ourselves that the stove was correctly installed and safe.

So we ripped out the old liner and went for a full new installation. As it turned out the existing liner had not been double skinned and there was no vermiculite in the cavity, only random pieces of building debris so the existing stove had been somewhat unsafe.

Here is the double liner being pushed down the chimney to be connected with the stove: 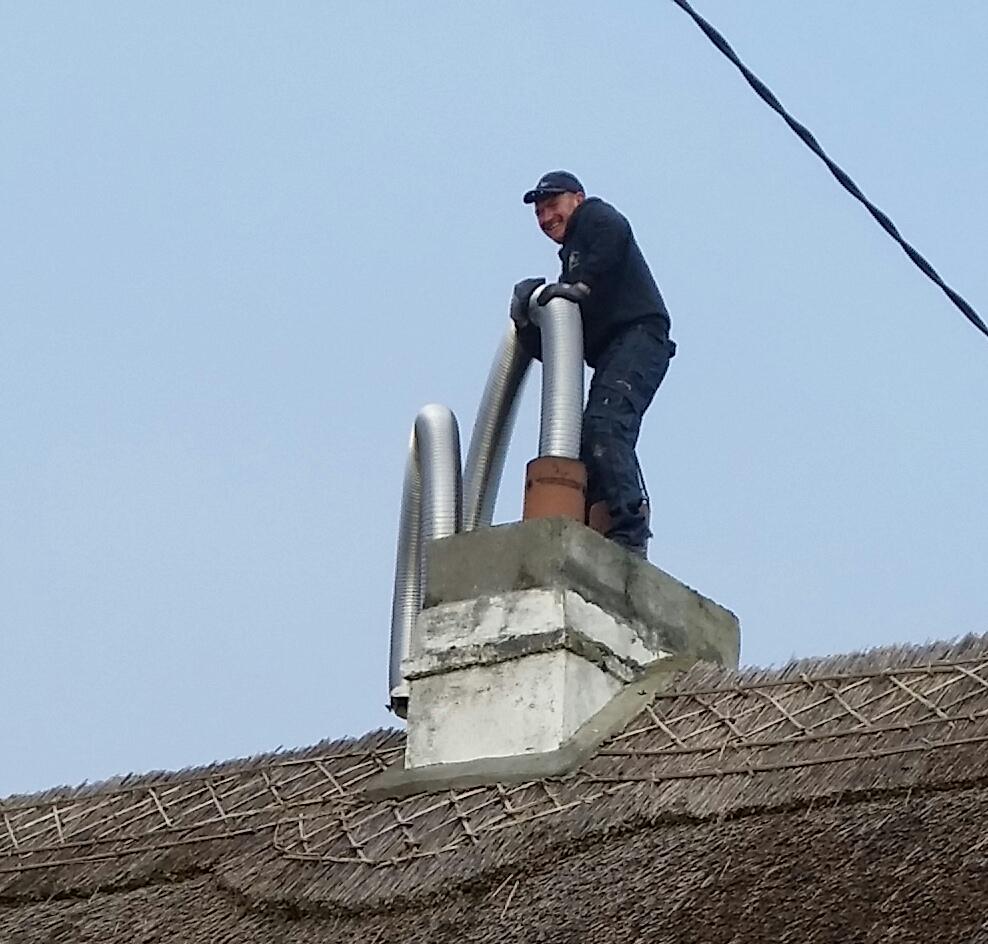 The grandparents also joined us on this trip to lend a hand. Here we are outside while the stove was being installed (the white bags are the vermiculite ready to be poured down the chimney). 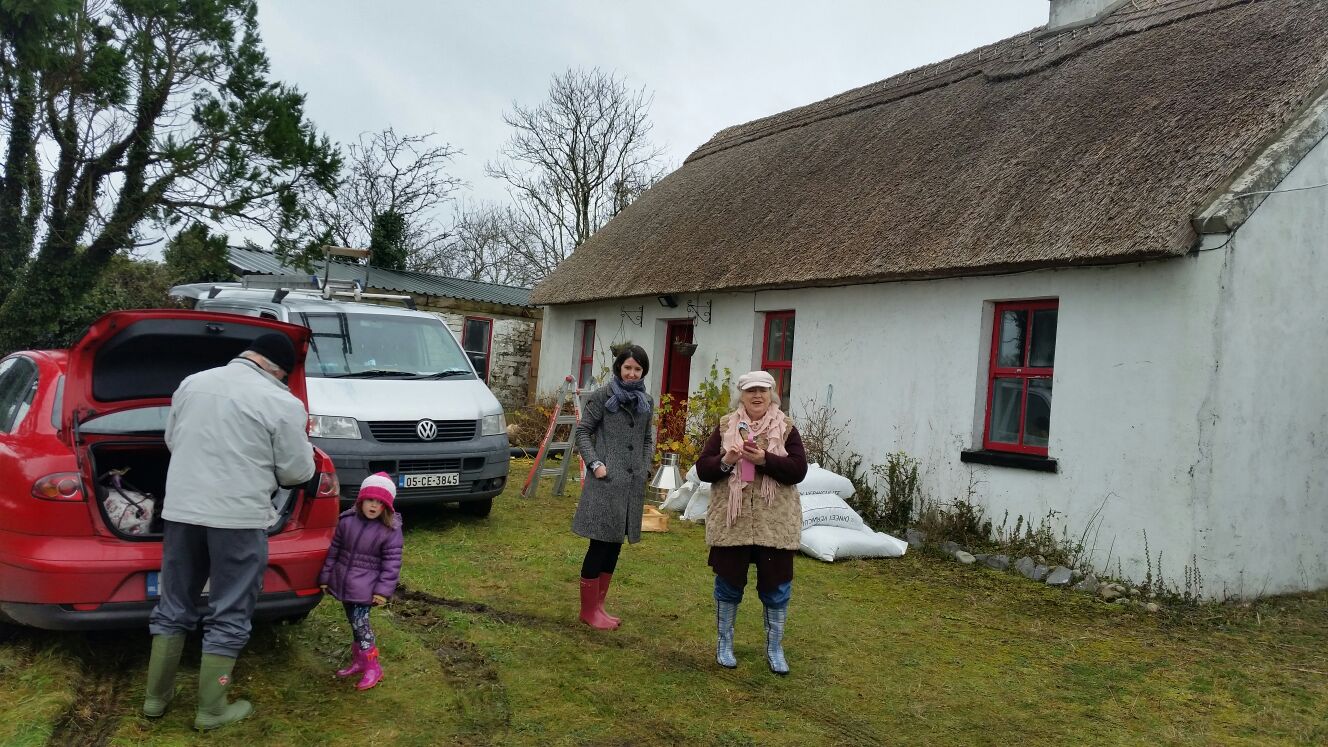 The stove we ended up going for was the Nestor Martin Harmony I. Getting this fired up for the first time and feeling the warmth fill the cottage was a moment of great joy! 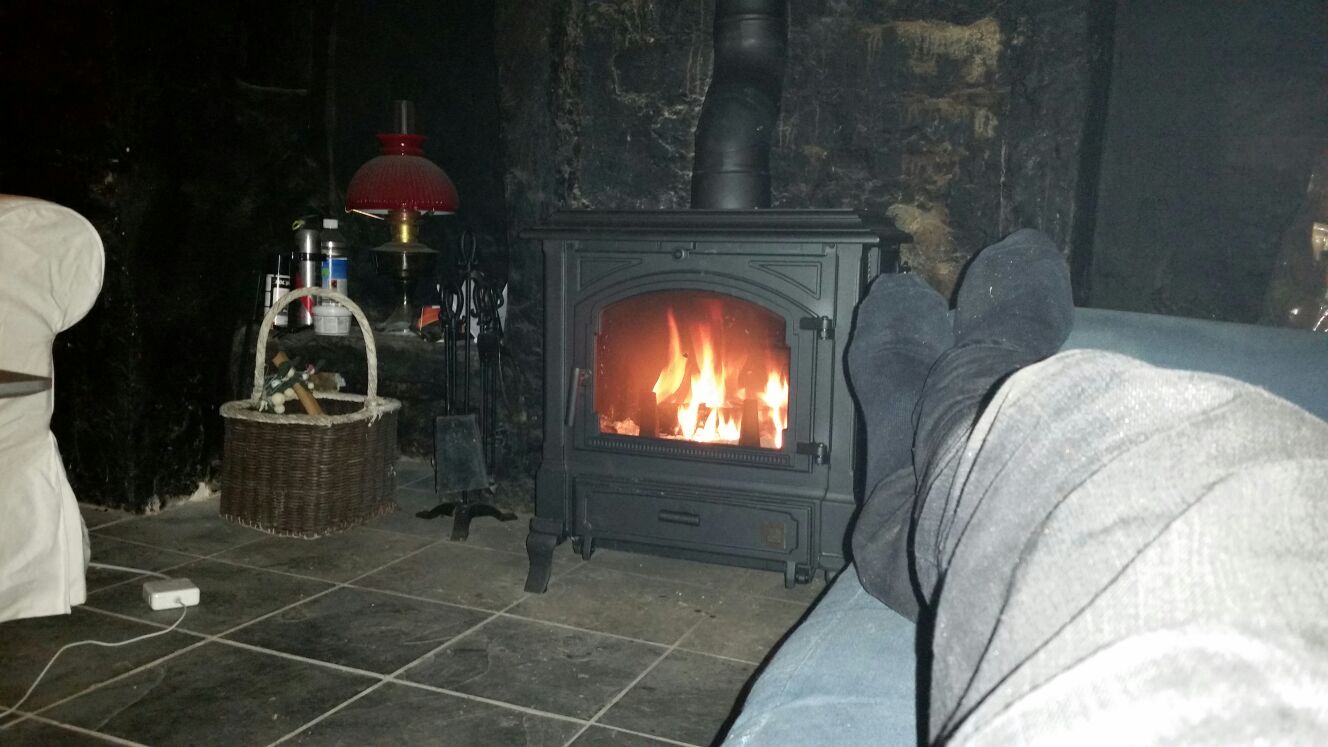